Kindesmissbrauch in Israel :: Our Stories

This story began when she did something that a lot of people do at some point in their lives: she fell in love with the wrong guy. She was a young student from Germany volunteering in a kibbutz during summer vacation, he the suntanned Bedouin who ran a Bedouin tent for tourists next to the kibbutz. She was the gate to the western world for him, he was the exotic counterpart to western decadence. They had a relationship for quite some time, during which she interrupted her university studies in Germany every once in a while in order to come to Israel and see him. Back in Germany she discovered she was pregnant and decided to have the baby, although he demanded that she have an abortion .After the boy was born he did not come to see him, but convinced her to come to Israel and marry him - and so she came, with her young baby, believing they would be a family. But there was no wedding ceremony in his tent waiting for her, just a little office where two Bedouins she had never seen claimed to have witnessed their marriage. The paper she got was subsequently never recognized as a marriage certificate by any state authority. Mother and child never lived in the family tent either, because, as she was to find out bit by bit, that’s where his other wife lived, having given birth to a son almost at the same time. Since it is rather uncommon for Bedouin girls to survive a pregnancy out of wedlock (they would have been killed for violating the honor of the family) this means that he married this woman a year before he married her.

Life in Israel turned out to be very different from what she had expected. She meant to bring her child up experiencing both cultures, her German and his Bedouin, alongside the surrounding Hebrew culture. But whereas she accepted that her child took part in Muslim ceremonies, his father never wanted him to celebrate Christian holidays. He rented a tiny flat for mother and child in Mizpe Ramon, a little town nearby, visited once a week, claiming that he had to stay in the desert with his young camels. Since their marriage was not recognized, she never got a permit to work, and her savings were soon used up. Being illegal, once her tourist visa expired, she could not get help from the state.
During her second pregnancy things deteriorated: she had just found out about the other wife, and she started bleeding – the placenta began detaching. She had to stay in bed, and he left her without food, without a fridge, and without a telephone. She had to stop breastfeeding the older child, who had been exclusively with her till then, and the father took him away for three weeks without bringing him to see his mom. She wanted to go home, take her child, over whom only she had custody, out of this nightmare. But she couldn’t fly without endangering the unborn baby’s life and decided therefore to leave only after giving birth. While she waited for the birth, he brought the battered child of his Bedouin wife to her, and she tended him for a month until he recovered from his injuries.
The second son was born. He collected her insurance money but never paid the hospital bill. To get a passport and health insurance for the babies she agreed to let them get Israeli citizenship, a process during which he was listed as the father. He did not agree to have their passports issued though, claiming that he wanted them to grow up as Bedouins without making contact with German culture.

He started taking the oldest with him without telling her where or for how long, so far not caring about the baby. When she had a severe breast infection he refused to pay for a doctor, telling her that everyone had to die one day, and her time was now. Local public health nurses helped her to find a doctor, and started following her case.
He started beating her severely, hit her against the wall, tried to break her leg and threatened to kill her. The police ordered him not to come close to her house for a week, but she was terrified enough to flee to a shelter with her kids. In the meantime he managed to get court order to prevent her from taking the children out of the country, along with a court decision to have the oldest for two days every week. This decision was made against the recommendations of the shelter’s professionals, who feared the father might not bring the child back and opted for letting him see the children in the presence of a social worker only.
Back in Mizpe Ramon he came to the apartment and stayed, controlling each and every movement, and with the help of his friends followed everywhere she went. He raped her several times. She got pregnant. At the local police station she was asked if she could prove her complaint, and when she pointed out that she was pregnant was told that this was no proof at all… The suspect was never even questioned.
By now she had become a prisoner in a country that did not accept her being there: her children meant everything to her, but in order to take them out of their private hell she would have been forced to leave them behind. Now the third baby came into this world: a child of rape. The children came back with bruises from their father’s tent – she still has the pictures. One day the second son described how his uncle, whose tent is next to his father’s, puts a little plastic bag on his penis, puts it in the child’s mouth and throws the little bag into the fire when he’s finished. His brother, being asked, confirmed that. Later a complaint was filed, but the children were not questioned by a professional child interrogator, but by a local policeman, whom they refused to tell anything. None of the men involved were questioned.
There were financial issues: She could get social help from Germany, but only if she accepted his support, but the Moslem court made her decide between moving back to him or refusing his support. Living with a violent man was out of question, so the embassy stopped paying as well. She agreed that he would pay less child support if he let her out of the country – he paid less but did not allow her to leave. Finally she got a work permit and decided to move to another town in the south, where she hoped she could find work.
During their next stay with him he did not return the two older children, but went to the Moslem court, where he filed a complaint against her for being violent with the children and unfaithful to him (sic!). It was decided, without asking for proof and without her presence, to give him full custody over all three children. Even the youngest, who has never been with him. A few weeks later he tried to kidnap the baby as, but was prevented by a bystander to do so.
She saw her older children twice a week in the presence of a social worker and their father. The children behaved violently towards her, hitting and spitting and running back to their father for assurance. Psychologists call it parental alienation syndrome, when children behave so outrageously towards a normative parent. The social worker and the Bedouin psychologist though – who told her she should veil herself properly if she wanted to talk to him – interpreted this behavior as a sign that the meetings with their mother were too traumatic for them to bear. She subsequently did not see her older kids for months. Recently see saw them twice for a few minutes, in the presence of their father who continues turning them against her. They refused to touch her under their fathers eyes, so she had to take pictures.
Meanwhile time is running out for her. The children seem to forget their mother tongue. They struggle in a harsh hierarchy, being the children of the non-believing woman from the outside, probably still experiencing both physical and sexual violence. They are quiet in school, interpreted by the teachers as being well. The social services are preparing to take her little child: an opinion was given that her youngest was not sufficiently stimulated and doesn’t learn Hebrew at his mother’s home. The father though is everybody’s darling: tourist entrepreneurs bring their groups to his tent, the liberal of the town are glad to have a real Bedouin friend. He tells everyone that she is crazy and that she, not him, tried to kidnap the children. Violence is not mentioned, and then – why should they care? She’s a stranger, after all, not one of us.

On friday the 13.11.2009 Channel 1,an israeli TV station broadcasted my case on TV.The broadcast starts after 20 min.Here is the link to the video.

Since 2 weeks my ex is supposed to bring my children twice the week to an emergency centre in Beer Sheva for psychological threatment and for meetings with me.My ex does not bring my children,I did not see them for 2 months.The socialworker Yossi Crameen,who is announced by the shaariya court in Beer Sheva to be the social worker in my case and who is just acting for the wellfare of the father,called the centre and gave the following explaination why the father does not bring the children:The children have a trauma from the town Beer Sheva,since the meetings with me were in Beer Sheva.It would be unaccabtable for the wellfare of the children to bring them to Beer Sheva without a psychical treatment,which prepares the children for to come to Beer Sheva.
My ex took a new lawyer,the third laywer against me.He seems to have enough money for to pay three laywers,but he is unable to pay maintains for his youngest son and take care about the children,who are living with him.Their clothes are dirty and have wholes,the shoes are at least 3 sizes too big.The expensive shoes I bought them they are not allowed to wear,he properbly threw them to the garbish.

Since my ex does not pay childsupport and costudy for me since almost 2 year,as decided by the court,I got into real financiel problems.A few days ago I received a bill for the arnona,I have to pay 3775,90 ILS within 15 days,this is about 700 Euro.Arnona you have to pay here to the town for the flat.I do not have that much money.I tried to talk to the town today,but no way.They told me that if I do not pay they will sent somebody to impount.I told them that I do not have anything at home,even not furnitures,so the answered me,that if I do not pay,I will go to jail.My ex who causes this situation gets not punished at all.If I would have an israeli ID,I just would have to pay 20% of the arnona,since I`m a single mother,but I have a status of a tourist and I do not get any discounts.

Today the israeli newspaper "Idiot Aronot" has published an article about my case and 2 other women. 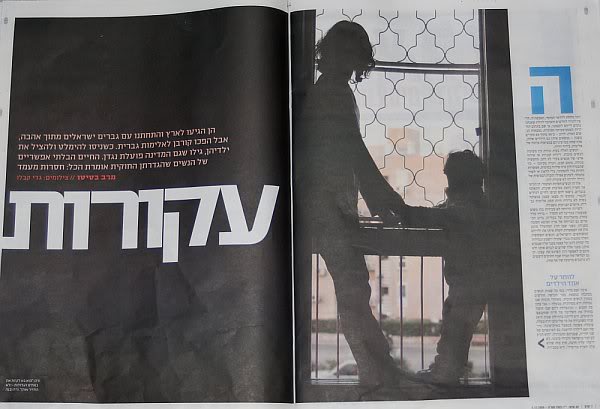 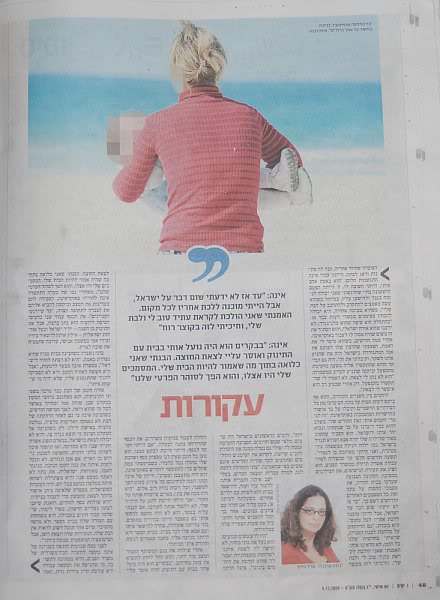 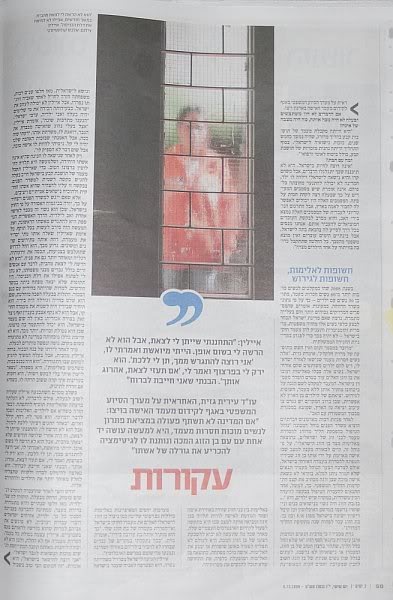 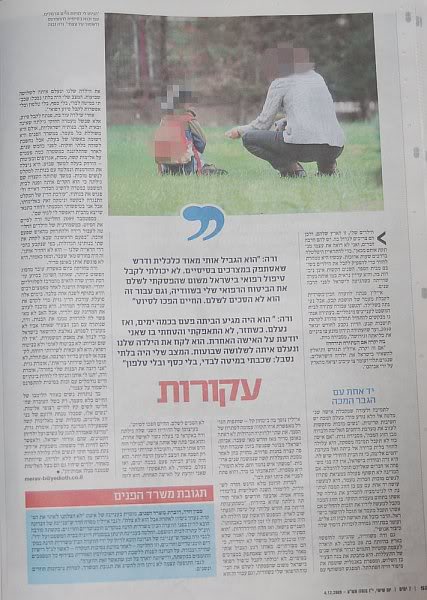 Kindesmissbrauch in Israel :: Our Stories